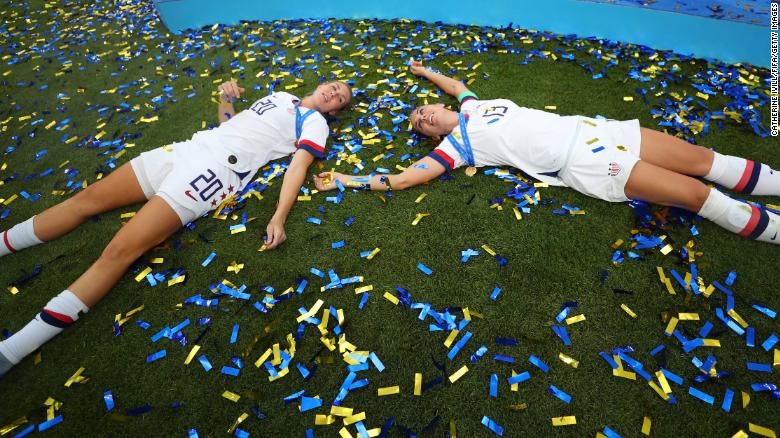 Lyon, France – When a novice is faced with a foe as experienced and ruthless as the USWNT at the Women’s World Cup, the outcome is almost inevitable and so it was on a muggy early evening in Lyon when the reigning world champion defended its title with a comfortable 2-0 win over the Netherlands.

Competing in its first World Cup final, few gave the Dutch hope. The reigning European champion it may be, but it had not yet come up against the best team in the world, the dominant force of its generation.

The Netherlands held on for over an hour but two goals within eight minutes sealed the underdog’s fate.

This was the tournament where Megan Rapinoe transcended her sport, and so it was perhaps apt that the 34-year-old opened the scoring, coolly drilling home a penalty before a Rose Lavelle thunderbolt made sure of a second successive title, and a fourth in eight editions.

Much has been written during this tournament about the European teams in rapid pursuit of the USWNT, posing a threat to a soccer dynasty.

That it was both Lavelle and Rapinoe, representing the team’s youth and experience respectively, who scored was a perfect way to illustrates that the US possess the personnel to see off challengers for some time to come.

Leading the chase are those European countries whose men’s national teams have traditionally been superpowers of the beautiful game.

The Dutch, English and French football federations have started to invest heavily in women’s football. But, in France at least, all have been vanquished. Thailand, Chile, Sweden, Spain, France, England and now the Netherlands have been swept aside by a team unbeaten in 17 World Cup matches.

“The level around the world is going exponentially every year,” Jill Ellis, the first coach to win the Women’s World Cup twice, told reporters after the match.

“Four years on, this was incredibly difficult because the opponent is better The teams that we had to come through are some of the best teams in the world. In terms of the path and the level, this was pretty challenging.”

Hola! I'm Paula. You can call me Pau. Reading and Writing is my most favorite hobby. It feels like I'm in my own world. I've been writing for about a year now. And I'm still loving it :-) I was once lost. Struggling to know how to live. Struggling to find the reason to live. But a year ago, I finally found the passion that would help me living. And that's writing! I just love to write. How about you? Wanna share your story? Feel free to message me!

Other posts by author