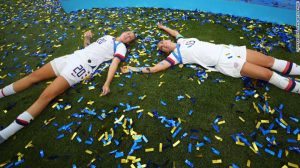 Lyon, France – When a novice is faced with a foe as experienced and ruthless as the USWNT at the Women’s World Cup, the outcome is almost inevitable and so it was on a muggy early evening in Lyon when the reigning world champion defended its title with a comfortable 2-0 win over the Netherlands. Competing in its first World Cup final, few gave the Dutch hope. The reigning European champion it may be, but it had not yet come up against the best team in the world, Discover More